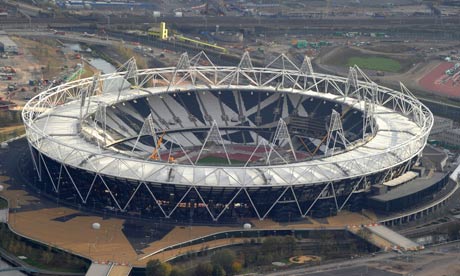 The Olympic Stadium in Stratford will be surrounded by a wrap, sponsored by Dow, during the Games. Photograph: David Goddard/Getty Images

Ken Livingstone, who was mayor of London when the city won the right to stage the 2012 Olympics, has warned that the Games risk a “crisis of legitimacy” over a contentious sponsorship deal with Dow Chemical which has led to fears that Indian athletes could stage a boycott.

Livingstone, who will stand again next year to be London mayor against the incumbent Boris Johnson, has joined a growing chorus of criticism from those who believe Dow is refusing to face up to ongoing liabilities from the 1984 Bhopal disaster, which, according to Greenpeace, has killed up to 20,000 people and injured tens of thousands more.

Dow, which is a top‑tier International Olympic Committee sponsor, is linked to the disaster through Union Carbide, the company that owned the plant at the time of the disaster, which it bought in 2001. It claims its liabilities to victims have been settled in full and twice upheld in the Indian supreme court.

After it emerged last week that the Indian Olympic Association is due to discuss the issue at an extraordinary meeting on 5 December in the face of opposition from some athletes, however, Livingstone has added his voice to calls on the London 2012 organising committee to scrap the deal and draw a line between the legacy promises that helped to secure the Games and the decision to allow Dow to sponsor the fabric stadium wrap.

Livingstone said Dow had a “moral responsibility” to deal with residual contamination in the area. He said: “Dealing with industrial contamination was the first necessary task to transform the Olympic Park from a derelict polluted wasteland into the largest urban park in Europe. It would undermine London 2012 to take money from a sponsor that refused to clean up its own subsidiary’s mess.”

He said the issue could “go as far as creating a potential crisis of legitimacy for the Games” and claimed that given that the venues had come in under budget questioned whether there was a need to “accept £7m from Dow Chemical so that they can rehabilitate themselves and destroy London’s reputation in the process”.

The former mayor said: “Our objective should be an Olympics that is good for London, not a them-and-us Games. The soul of the London Games is worth much more than 0.08% of its budget. It would be far better to do this than to allow Dow Chemicals to exploit an opportunity that has been paid for by people in London and across the whole country.”

Livingstone called on organisers to “admit they had made a mistake” and, if they could not find replacement sponsors, to fund the wrap from unspent contingency funds.

Tessa Jowell, the shadow Olympics minister who sits on the London 2012 board, has called the IOA decision to vote on whether to boycott the Games over links with Dow Chemical a significant step and will travel to India this week to meet IOA officials and the Indian sports minister.

Barry Gardiner, the Labour MP who has gathered signatures from 24 parliamentary colleagues and 21 Indian former Olympians calling on the London 2012 chairman, Lord Coe, to scrap the deal, has written to the prime minister, David Cameron, to ask him to intervene.

The Indian government, which is set to return to the Indian supreme court in the coming weeks to try to achieve an enhanced settlement for the victims of the 1984 Bhopal explosion, has yet to respond. The Bhopal politician Shivraj Singh Chauhan on Thursday called on the sports minister, Ajay Maken, to boycott the Olympics.

Locog, which has defended the decision and the process that led to it, said on Friday that it had not had any indication that India would boycott the Games. The IOC said last week that “reports of a boycott are not accurate”. It added: “The IOC would of course oppose a boycott, as ultimately the only people hurt by actions like these would be the athletes themselves.”

Coe has defended the choice of Dow to fund the wrap, which became a casualty of minor cuts to the £9.3bn public funding package for the Games during the Comprehensive Spending Review process last year. “Dow have been a global partner of the IOC since 2010. They came through a rigorous procurement process, one that was geared to creating the most sustainable solution to the wrap around the stadium,” Coe said last week.

“Dow were not the owners, the operators or involved in the management of that plant at the time of either the disaster or the settlement in 1989 that has been upheld twice by the Indian supreme court. There are issues around this issue, but I am satisfied they are not issues that directly involve Dow.”

Dow has said in a statement: “Regarding Bhopal, the 1984 Union Carbide Bhopal incident was a terrible tragedy that none of us in the industry will ever forget. However, it is disappointing that some people are trying to assign blame and responsibility to Dow.”