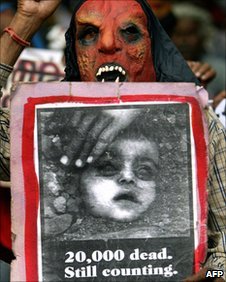 There is growing anger in India at the decision by Olympics authorities in London to select the Dow Chemical Company as 2012 Games sponsor.

Campaigners say the company has links to the devastating Bhopal chemical disaster in 1984 and should not be allowed “to detoxify” its brand.

The London authorities welcomed Dow for funding $11.4m worth of artwork.

They said Dow did not at the time of the Bhopal disaster own the chemical plant that was responsible.

Dow Chemicals bought Union Carbide – which then owned the plant – in 1999. It has said in the past that its $470m (£287,840) settlement for those affected by the tragedy was fair and final.

The Indian government says some 3,500 people died within days of the leak.

Campaigners put the death toll as high as 25,000 and say the effects of the leak continue to this day.

Activists fighting for the survivors of the disaster are calling on the Indian government to officially protest against London 2012’s move.

“Dow as sponsor of Olympics is like a dance on the graves of Bhopal gas victims,” said Satinath Sarangi of the Bhopal Group for Information and Action. 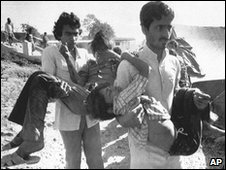 “On the one hand, Dow is running away from its liabilities in Bhopal, but on the other hand it is doing [a] public relations [exercise] at the Olympics.

“We will hold protest rallies in Bhopal, Delhi and in London if necessary,” he said.

The campaign is supported by former world hockey champion, Aslam Sher Khan, who has suggested that India should consider boycotting the London Olympics over the issue.

Mr Khan was part of the Indian World Cup team in 1975 which won gold.

“As a citizen of Bhopal and a sports person I am writing to the Indian Olympic Association, the prime minister and the sports ministry objecting to choosing Dow as one of the sponsors,” he said.

“Being a big power now, India should lodge a strong protest. Countries in the past have boycotted the Olympics over various issues.”

Dow insists that while the past must never be forgotten, its “position as a Worldwide Olympic Partner” represents its “vision for the future”.

“Fundamentally, the Olympic Games are about peace, progress, sustainability and the world coming together to celebrate our common humanity. We share that vision and are committed to achieving it,” a company spokesman said.

Dow said that although it “never owned nor operated the plant and the legal claims surrounding the incident were resolved in 1989, long before Dow acquired Union Carbide, we – along with the rest of industry – have learned from this tragic event and have helped to drive global industry performance improvements to ensure that such incidents never happen again”.

The Olympic authorities praised Dow for funding an artwork wrap around one of the stadiums.

London Olympics chief Sebastian Coe, has termed it “the icing on the cake”.

A Games 2012 spokesman said: “Dow was appointed as the supplier of the wrap following a rigorous procurement process. All of our suppliers must work within our own sustainable sourcing code and reflect our values and sustainability requirements.”