Bhopal: The victims of the Bhopal Gas Tragedy, the world’s worst industrial catastrophe, in their struggle for last 27 years came out on the roads of the walled city at dawn much before the sun rays kissed the ground on Tuesday to cajole and persuade the business community with humility to down their shutters and enforce Bhopal Bandh.

As the old city echoed with Allah-o-Akbar, Muazzin’s Azan call to the faithful for Fajir Namaz (early morning prayers of Muslims ) the survivors spread to different localities and announced about Bhopal Bandh on the public address system pleading shopkeepers and common man to heed to their requests and show solidarity with them in their hour of crises. 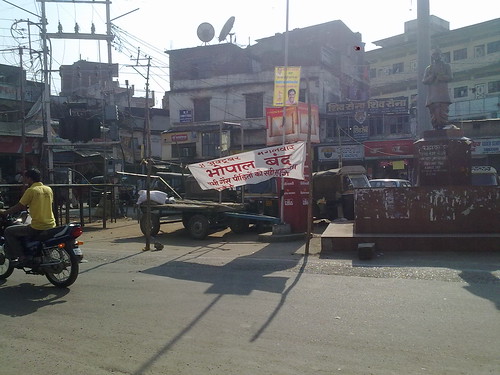 The Bandh was organised to wake up the Bharatiya Janata Party ruled Madhya Pradesh Government and the Congress-led UPA Government a the Centre to the pain and agony being faced by half a million survivors for more than two-and-a-half last decades in the absence of proper compensation, treatment and rehabilitation.

The NGOs are demanding that the central and state governments present correct figures of death and the actual extent of injury caused by the disaster in the soon to be heard curative petition in the Supreme Court of India. Through the petition the governments are seeking compensation from Union Carbide, USA and its current owner Dow Chemical, USA.

On the basis of Union Carbide’s internal documents and findings of the decadal epidemiological research by the Indian Council of Medical Research, the survivors’ organizations are calling for a significant revision in the government’s assessment that 93% of those exposed to Union Carbide’s toxic gases suffered only temporary injury.

Meanwhile, after the day-long Bandh Mr. Satinath Sarangi of Bhopal Group for Information and Action appeared much relieved by the massive response to it. Expressing his happiness he said that the Bandh was peaceful and voluntary. It shows how widely the sense of injustice among the gas victims is being felt. 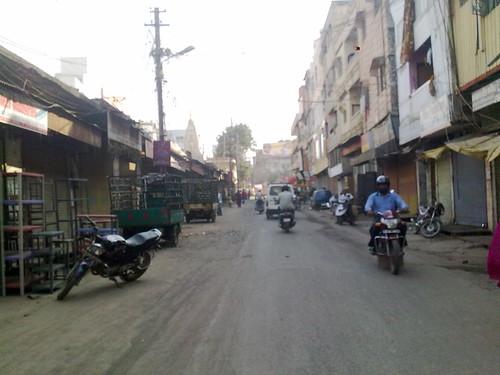 The call for Bandh was near total in the walled city where the defunct Union Carbide factory is situated, while it was partial in New Bhopal localities. was given by five NGOs working for the welfare of the survivors and was actively supported by the workers unions, traders associations and other survivors’ organizations as well many political parties.

The bandh call was initiated by various groups and NGOs fighting for the cause of the victims, including Bhopal Gas Peedit Mahila Stationery Karmachari Sangh, Bhopal Gas Peedit Mahila Purush Sangharsh Morcha, Bhopal Gas Peedit Nirashrit Pension Bhogi Sangharsh Morcha, Bhopal Group for Information and Action and Children Against Dow-Carbide. The protest was supported by CPI, CPM, Janata Dal (United), Samajwadi Party and Bahujan Samaj Party, the Bhopal Chamber of Commerce, local transport and labour associations among others and a rally was taken out on the occasion.

As part of the bandh all shops (other than medicine stores), restaurants, workshops and other establishment were closed in the city and the main roads had no auto rickshaws or buses plying. The five survivors organizations said that they now plan to hold other protest actions on the same issue with voluntary and peaceful mass participation. 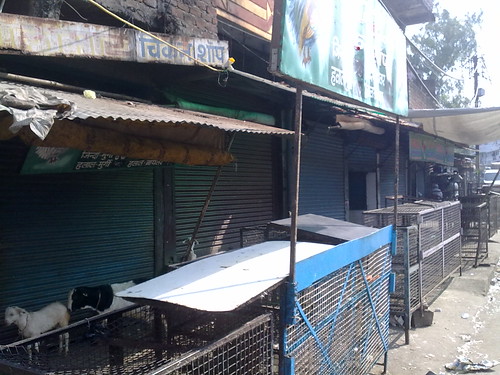 In a related development, another NGO Bhopal Gas Peedit Mahila Udyog Sangathan, (BGPMUS), which did not take part in the Bandh shifted the date of a rally planned on October 11 in Delhi to November 1. Convener of the organisation Mr. Abdul Jabbar said that the victims will now leave for Delhi from Bhopal on October 31 and hold a demonstration in Delhi on November 1 to demand compensation.

Meanwhile, it may be mentioned here that almost 27 years after the disaster caused by massive leakage of lethal gas from Union Carbide plant in Bhopal, the BJP government in Madhya Pradesh two months back set up an inquiry commission to examine the various aspects of the accident. Madhya Pradesh Chief Minister Shivraj Singh Chouhan took a long time to set up the inquiry, yet the notification doesn’t fix a time limit for the commission headed by a retired HC judge SL Kochar to submit its report.

Interestingly, the notification also notes the gravity of the tragedy which resulted in “unprecedented deaths and affecting millions with chronic physical and mental disorder”. It describes the accident as the “grave manmade chemical disaster in the world in human memory”.

Legal experts have scoffed at the government’s move “due to public outcry” against the injustice done to the victims by the Union Carbide (UCC).

The notification says the inquiry commission will examine the “role of the state administration and others in the arrest, release and providing safe passage to Warren Anderson (UCC chief), leading to his ascension (sic)”.

It may be pointed out here that a 1985 correspondence initiated by the then Union government yet again revealed how Union Carbide dictated India’s policy for compensating victims of the Bhopal gas tragedy. The documents, titled ‘Top Secret’, also highlighted how the Central government ignored the findings of its own agency when it came to assessing deaths and injuries due to the tragedy.

According to Ms Rachna Dhingra, a member of Bhopal Group for Information and Action, in a letter to the Cabinet secretary written in February 1985, the ministry of chemicals and fertilisers wrote about the willingness of Union Carbide, the perpetrator of the tragedy, to compensate the victims. It proposed Rs 1 lakh for every fatality and varying amounts to others on the basis of the nature of injuries.

The same formula, activists said was implemented and executed in 1991 for compensating the victims. The government snubbed even the findings of the Indian Council of Medical Research (ICMR) and followed the guidelines of Union Carbide in calculating the death and injuries.

It may be recalled here that 40 tones of poisonous methyl isocyanate gas spewed from the pesticide plant of the Union Carbide pesticide factory in the intervening night of December 2-3, 1984. The gas leak killed 3,000 people instantly and more than 25,000 over the years. It also affected 100,000 people that night and estimates are that more than 500,000 continue to suffer till date. ([email protected])