Progress, thoughts, ideas and photos from a community health project for young people in Sri Ram Nagar, affected by the 1984 Union Carbide gas leak in Bhopal (from Lorraine).

I’m writing this in retrospect, as time seems to have vanished at breakneck speed the last few weeks as it always seems to just when you need more of it.

The Sri Ram Nagar project continues to progress well, and I’m starting to realise I’m going to leave just as the momentum really gets going, but perhaps that’s exactly the way it should be. I am hoping that this is just the very beginning of a long lasting participatory health education programme, with the community healthworkers facilitating the group as the young people involved become more able to explore and share health education with each other and the wider community.

In the first couple of weeks we lost a couple of girls due to unforseen work commitments but thankfully gained a couple more, Sita and Preethi, plus we finally recruited our first boy, Deepak, who has become invaluable as our chief artist and design manager and unbeatable champion of ‘Bakree’, the game we have been working on as part of TB health education. At this point I must correct myself from the last blog entry. I already mentioned that my understanding of what is happening when everyone speaks in Hindi is somewhat limited at best, but I (apparently optimistically) thought I had a fair idea of what was going on when the medium was English, it being the language I speak and all.

When they first told me about their idea for the TB education game I was fairly convinced that the girls were saying it involved ‘gods’. Highly impressed, I had visions of elaborate paintings of Ganesh and Hanuman giving out positive health messages. I started to wonder when these Gods were going to appear at about the same time that I started wondering why everyone kept talking about bakree (Hindi for goats). It transpired that the girls were saying ‘goats’ not gods and that the game is more about the big goat eating the small goats to get to the other side of the board than it is about Hindu deities! I like goats too though and since a few of them sit in on our meetings it seems rather appropriate that the game should involve them. 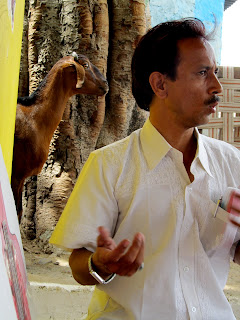 A couple of weeks ago I realised the personal implications that this project has on the people involved, when I discovered that one of the girls Roopa (name changed to protect identity) lives with the social stigma of having several family members be infected with TB. Unfortunately her father has never managed to complete the grueling eight month course of medication required to treat the illness, leading to infection with multi-drug resistant TB, which is much more difficult to treat, and reinfection of family members.

To begin with Roopa was shy and didn’t seem to keen to participate. She hung back on the outside of the group, listening intently but not really getting involved. I was aware of the other girls giving her sideways glances and gauging her reaction as we opened discussion about TB in the first couple of meetings. Living in overcrowded living conditions is one of the major risk factors for the transmission of TB, and it is easy to see how the disease spreads from home to home. It is also easy to see how word spreads and why people are so fearful of being diagnosed with TB because of the impact it may have on their social life and peer perception.

Watching Roopa get more involved every week, moving closer into the circle and beginning to voice her opinion more confidently has been a joy. Although at 19 she is the oldest of the girls, her reading and writing skills are behind the others yet she has persevered with grace and determination. One of the younger girls immediately went to her side and helped her out in those first meetings, without making a fuss, or drawing attention to the fact that she was struggling to keep up with the others. Last week I watched her giggling with one of the other girls, scolding her when she made a mistake and carefully writing her piece on the art project she was doing, and it really struck home to me that this type of participatory approach does not only benefit physical health in a community; it strengthens so many aspects of learning and confidence building, skills that hopefully will go on to last a lifetime. 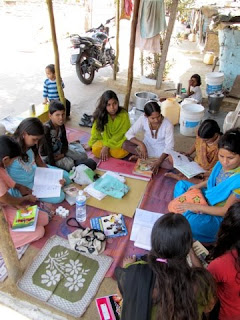 After our first meeting, and our second first meeting due to changing faces, we steamed ahead with TB health education. Masarrat and Nasir (below) used some really good interactive models to demonstrate the patho-physiology of TB and used role play to demonstrate the importance of completing treatment and taking medication every day. 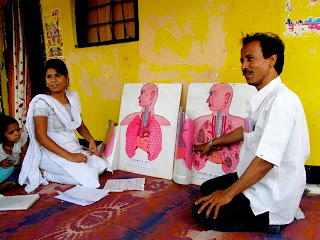 We also left a few books for the girls to read and over the course of a few meetings, compiled a list of positive and negative statements about TB that the goat game would be based around. The girls clearly study hard between meetings because they have been spouting some great information about TB health promotion, and it is obvious they are engaged in the subject. Some girls have started sharing stories they have heard about people with TB, and we have a growing group of grandmothers sitting on the sidelines, who appear to be paying attention to what we are saying, in between looking after children, collecting water and gossiping about the neighbours. The plan is that once finished the game will be played in the courtyard, to consolidate the knowledge the group has gathered and to start to raise awareness in the community about TB, before we move onto the next phase of the project where we will carry out a small community study on TB symptoms and awareness. 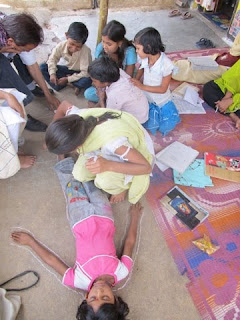 We have also been continuing with our English lessons although they are not going exactly to plan (I take my hat off to all English teachers, and curse the Scottish education system for not teaching us English grammar). Last week we drew a chalk body on the ground and labelled it in Hindi and English. Well that was the idea, but the Hindi quickly got dropped and the class dissolved into hilarity over my confident announcement that the Hindi word for toes was ‘ungli ka pairs'(translates as the feet of the fingers). It transpired the next week that the girls had remembered none of the English body parts we had learned and so we stepped it down a little, playing ‘heads shoulders knees and toes’ until they could remember the words. I’ve been testing them since, and the song seems to have worked! 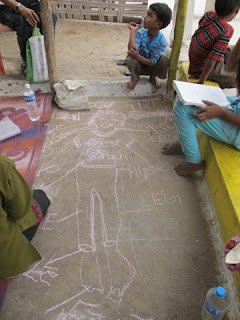 We are now frantically trying to complete the construction of the goat game, which needs to be done faster than intended thanks to the announcement that six of the girls will be leaving for summer holidays. Until the end of July. With my British plans waylaid I was sure that would be the end of the project and we would call it a day after the goat game was played. However Masarrat is clearly made of stronger stuff than I am and, after looking at me like I was crazy when I seemed a tiny bit stressed out that 75 percent of our group are disappearing, stated that we would continue as before, with the people we have left. Hurray for the Indian ability to roll with the punches!!