In the guts of a monster

Home / In the guts of a monster

Firstly, I have blatantly plagiarised the title of this blog from Eric, a beautiful spirit who is incredibly talented, intelligent and inspiring and who has just left Sambhavna to go back to high school in Pune. I would like to say he doesn’t mind, but I haven’t asked him. I can’t think of a more acurate description of what I’m about to write though so there you have it, I have a pathetic imagination and have resorted to stealing the lyrics of a Guatemalan teenager whos native language is Spanish… 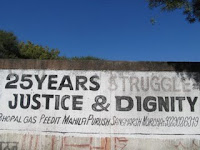 My sister Katy, who is pretty wise, once told me that the importance of life to every living being is evident when a fish is caught on a hook. Some people don’t place an awful lot of value on the life of a fish but it will do EVERYTHING in its power to survive. It wants to survive, and is willing to fight until the last breath (if it can be said that fish breathe). That, I’ve been thinking, is what it means to be alive. The will and the determination to survive, to live and to breathe, no matter how tough the struggle is and no matter how little others value your life. Individually we, and our loved ones, value our lives more than anything in the world.

The right to life is one which is clearly set out in the Universal Declaration of Human Rights and is one that should be protected by law. One would think that it would offer people some degree of protection from needless death caused by corporate lack of responsibility, yet it seems that the world over people are exploited, poisoned and ultimately killed by the global demand for ‘development’. 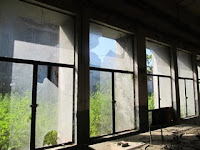 Broken panes of glass in one of the control rooms

Is it because society places less value on the lives of the poor? do we think that they don’t matter so much because they live in slums or are illiterate? Or is because they are less likely to speak out, and don’t have the money to fight huge legal battles with powerful people? Is it, as some would have us believe, an unfortunate but inevitable consequence of development, that a few souls will be lost as we strive to make the world a ‘better place’?

I don’t have the answers to these questions, Ive just been musing over it the past few days and wonder what people think. 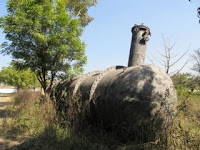 I visited the Union Carbide factory yesterday, the site where tonnes of lethal gas leaked across a city of sleeping people in 1984. The first thing I was struck by was its beauty. Not what you expect from a toxic waste site that has been abandoned for years and been allowed to plant its chemical waste firmly into the soil and ensure that everything that comes into contact with it is poisoned. But it’s hard not to notice the way that tall green tree branches have crept in the windows, and that plants have sprouted in the unlikeliest of spaces, between iron bolts and steel bars, stretching up towards the rays of sunlight that cast bright sunny beams across broken glass and dusty chemical bottles. Those plants look healthy, strong and nourishing. The farmers who come to graze their cattle and goats think so too, as do the children who climb the trees and play hide and seek in the bushes, hoping that the government security guards who play cards and chit chat in the sunshine wont notice them. . .or if they do, wont chase them away. It seems the perfect playground for a child. The trees however, hold deep dark secrets that lie in their roots and penetrate their leaves. The entire site is completely contaminated with various chemicals that have been left to leach their deadly components into the ground. 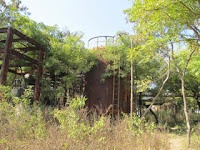 As we walk around the factory, pushing past thorny branches and strolling along tree-lined pathways I am shocked and saddened by what exists here. Rooms full of spilled jars of chemicals with hazard signs sill clearly visible after 26 years, left lying like the equipment of a failed science experiment. A factory full of the components required to make pesticides the world over, most of it extremely dangerous, has been discarded when no longer useful to a profit-making corporation. It was walked away from and forgotten about, just like the people who were employed there. 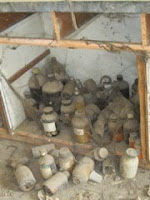 As we near the edges of the factory plot a smell of chlorine reaches us on the wind. Sanjay, our guide, explains that toxic waste from the site was dumped in a pond on top of three layers of plastic sheeting while the factory was in operation, and of course no effort has ever been made to clear it up. He explains this shortly after he tells us how on ‘that night’ he was 6 months old and he survived. His parents didn’t. And neither did five of his siblings, which left him, his sister and brother. His brother developed severe mental health problems following the gas leak, a health problem unrecognised by the Indian government as a potential result of the gas, despite far higher than normal rates of anxiety, depression and severe mental illness in gas-affected areas. In 2006, Sanjay’s elder brother committed suicide. He now has one sister in his family left. He is fairly matter of fact as he tells this story, I guess its not the first time a bunch of curious Westerners have asked him these questions. He is also pretty matter of fact when he tells me he has no health problems from being exposed. ‘Oh except I did have a stroke when I was 21 and was in intensive care for three days, the doctors said that was quite unusual” 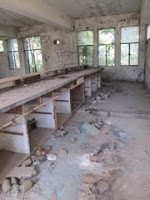 A glimpse of what Union Carbide left behind

Sanjay shows amazing strength of character and strikes me as one of those people who can do anything they turn their hand to. He is studying for a Masters, has a keen interest in photography, tutors children in his spare time and flits about town sorting things out for people on the motorbike his brother bought him, some years ago. He is also pretty funny and has an inspirational ability to make jokes from the least funny of circumstances, but more on that in my next blog which is going to be a little more positive, I promise!

Keep going… I know this part is tough reading and I appreciate you hanging in there. 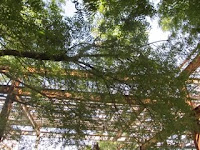 Nature, much like the Bhopal survivors, will not give up

As we near the gates to leave this monster’s guts (as Eric so eloquently put it) the guards ask us how it makes us feel to visit the site. I don’t know what to say. Shocked, Angry, Sad. A little guilty that I will rush home and change all my clothes and shower while people remain saturated in chemicals with no way of washing them out of their systems… I ask them how they feel about working there. “It makes us sick. We are all sick, and getting sicker. But what can we do. It is our job.” I put to them the question, “Do you think that senior government officials or Dow Chemical (who took over UCC) bosses would come and sit here every day?” Of course as soon as I ask them this arbritary question I feel stupid, I hear my sanctimonious British self with the freedom of choice to ask questions and choose how to be employed (or not, as the case may be). The guards look at me pensively for a moment then one of them replies. “You have a point. But what can we do? We have to feed our families.” 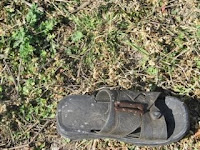 The truth is that they want to survive, in whatever way they can, like the plants, the farmers and the goats living alongside the monstrous factory and all it holds inside and out. Like Sanjay who lost almost his entire family thanks to a corporation’s greed and disregard for human life. Like the people who are continually contaminated by poisonous water from the factories sludgy waste dumps, the children born with horrendous birth defects who you will hear more about soon and the people living with the horrific memories of the 3rd December 1984. Like you, like me, like every living being on our precious planet they value their right to life above all else.

NB: I want to apologise for the depressing nature of this blog, but I’m not sure that I should. It isn’t a political rant, it’s not even meant to be an anti-capitalist rant, it’s just how things are here. All I will say is that I hope to focus more on the positive things that are happening in Bhopal, because there are many, but I think it’s important that people know the nature of the situation that Bhopalis are facing here! XO